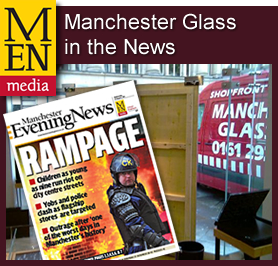 One company was on the streets all night helping to protect businesses from damage, even in the face of attacks from bottle wielding rioters.

Manchester Glass had five vans and 10 staff in Manchester and Salford, working to tackle a 1,500 per cent surge in calls.

Initially, most of its work was boarding up retailers which had their windows smashed, though later this shifted to boarding premises which had not been attacked but feared damage and wanted protection.

Managing director Patrick Air manned one of the vans himself to cope with the demand.

He said: “On an average week night we might get four to six jobs if we are lucky.

“On Tuesday night we had more than 80. It was an avalanche of work.

“We put up more than 300 boards, with one premises that had 27 windows broken.

“We will be busy reglazing well in to next week.

“Early on we briefly had to pull out of Manchester because our vans had bottles thrown at them, then we went back in convoy for safety.”

Denton-based Manchester Glass has 27 staff and was also called out to riot-related jobs in Liverpool, as well as coping with its normal workload from regular customers.